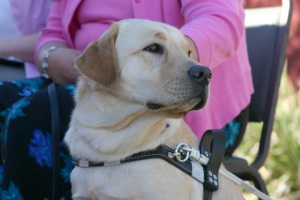 LOMAX (also known as “The Moof”) was my first GDA dog. After some personal circumstances prompted his first raiser to make the difficult decision to “re-home” him at the age of one year, I took over, expecting to have him for just a little while. I had him for ten wonderful (and bicep-strengthening) months, turned him in for formal training, and had the honor of participating in his graduation ceremony, which was one of the proudest days of my life. Guide Dog Lomax is now working in Tennessee, and “loving the country life,” as his terrific partner puts it. 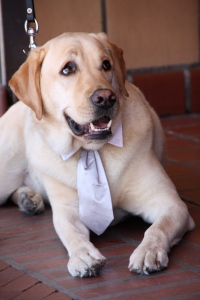 TRUMAN (also known as “The Roo”) was my second GDA dog, and the first one I raised from a 7-week-old lad on puppy pick-up day. He has always been a pain in the butt *ahem* challenge — high-energy, intelligent, slightly obsessive, vocal and stubborn — but he’s also extremely entertaining, and was the cutest puppy in the known universe (which is why he lived instead of becoming a stylish Labrador hat, as I am fond of telling him). He got all the way to formal training, only to be “career changed” for medical reasons just a few weeks in. He is now my crazy, ridiculous, zany, hilarious Forever Dog, and one of the great joys of my life.

He just reminded me to tell you that he’s also devastatingly handsome in a tie. 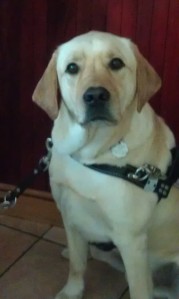 JETHRO (occasionally referred to as “The Fro”) was my third GDA dog. He joined our pack on September 24, 2010.

Unfortunately, geographic circumstances forced us into a re-home situation, so Jethro had to stay in California when we moved to Pennsylvania in March of 2011. But my best puppy-group friends committed to finishing his puppy training (thanks again, guys!). And as it worked out over the course of the next year, I was visiting California every few months or so for family reasons and got to “steal” Jethro back each time, so I still got to work with him and be part of his process. In October 2012, Guide Dog Jethro made ALL of his puppy raisers proud. He is now working with his awesome partner in Washington state.