So Far, So Cute

The day went more quickly than I thought it would. After meeting Matt & Amy for lunch at Denny’s — where we were seated at the same table where we ate breakfast before our boys’ graduation a month ago, by the way — we headed to the school for puppy pickup. Because I had received Lomax as a year-old re-homed dog, this was my first pickup day. I was anticipating the works: an hour of fidgeting through Louise’s orientation, drumming my fingers and thumbs on my lap as I stared at the “puppy kits” full of leash/collar/food/bowl/brush and fuzzy comfort toys.

Since everyone picking up a puppy this time was an experienced puppy raiser, however, Louise cut things short. Mercifully short? Perhaps, for most people. I suppose there was a part of me that wanted to go through the whole painful process this time, just for the ceremony, if nothing else. Still, whatever brings the puppies out faster….

Then suddenly someone was handing me the little man, whose tiny tail was already wagging. It didn’t stop.

After putting some littermate scent on the blanket I brought for him, and taking some photos, and trying unsuccessfully to get him to “get busy” on the grass before our 30-mile trip home in Friday afternoon Los Angeles traffic, Amy and I put little Truman in the car for his first ride. He seemed up for the adventure: 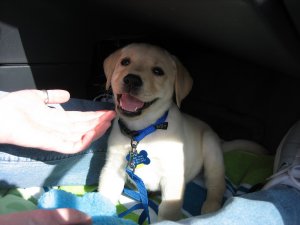 After about five minutes, he stopped squirming and settled in for the trip. No car sickness, no piddling… good stuff.

The only thing that was a little rough the rest of the day was potty time. Poor Truman, who had had quite a big day, was a bit lost on the concept of peeing *outside*. Or, at first, peeing at all. For a few hours after we got home, he’d squat and leave a drop or two before I grabbed him and took him out, then he’d refuse to go. Then, when I assume he could stand it no longer, I managed to get him to go on the busy command and he let loose a torrent. As I write this, not quite 48 hours into our association, little Truman is totally down with the concept that going out that particular door, and hearing those particular words, means it’s go time. Good dog!

Of course, he has also decided that peeing in the soft crate in the living room, right on top of the towel/blanket/toy/leash/what-have-you, is also perfectly acceptable (so much for the theory that they won’t soil their beds). I could hardly give him less room in there, so I don’t know what he’s up to, but it’s not about being trapped in a crate that’s too big when you have to go potty. He loves that crate and will willingly trot right in there whenever he feels like it…including when he has to pee. But we’re working on that.

He was pretty tired Friday night, but still eager to play and explore and play the “name game” back and forth between Amy and me, to great comic effect. He wanted to chase his tail and chew his leash and scratch at his collar and eat every molecule of inappropriate material off the surface of the floor, like most puppies do. And by bedtime, we were both ready to crash.

This entry was posted in Pick-Up Day, TRUMAN. Bookmark the permalink.