The first snowfall of the year is always…well, I have no idea how it is always, because I’m from California. And last winter (my first in Pennsylvania), I was out of town for both weekends that it snowed here, so what do I know?

But we got the first snowfall of the year today, and I thought a little snow shuffle on the back deck (our only enclosed outdoor area, sadly) would be just the thing to tire out the energetic nine-week-old dog and the nutburgers big dog. 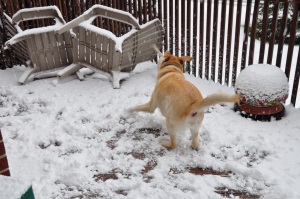 They had a great time. Sonny wasn’t apprehensive in the slightest, and Truman — who spins when he’s excited and needs to blow off some steam — did no fewer than eight consecutive donuts in an amazing display of some physics principle that eludes me at this time.

This is the point at which someone nags me about not getting any video, followed by the point at which I ask that person how many times they’ve single-handedly attempted to exercise a cyclone dog and a breakable dog in a small, slick, snow-covered space while it was still snowing, and then bring them both inside for a complete towel-dry on a small floor mat, while the puppy (who is not yet used to such things) goes all Tasmanian Devil on both the towel and the hands attempting to dry him.

Most days around 5pm, I open our front door so Truman can watch out the storm door for the pack leader to get home while I’m busy with dinner.

Yesterday I heard him barking, which was only odd because I hadn’t also heard the telltale diesel engine sounds of the pack leader’s car. A quick glance out the window revealed an empty parking space, so I went to see what Roo was so excited about. I found him, tail wagging high and play-with-me hackles straight up, woofing and sniffing at the bottom corner of the doorjamb. And on the other side of the storm door? Someone else who was ready to play, bouncing happily around my front porch.

It looked like Toby, my neighbor’s Houdini Spaniel (sure to become an AKC recognized breed). This wasn’t Toby’s first solo flight around the neighborhood; I’d helped my neighbor corral him before. So with one hand on Truman’s collar and one hand on the door handle, I invited him in so I could get a closer look at his tags and verify his identity.

Why did I not see this next part coming? Because I’m an idiot. As soon as the dog had two nostrils and a toenail inside my house, he and Truman went warp drive and zoomed around my living room, chasing and spinning in an attempt to break the Labrador land speed record. I reached for my leash after I somehow managed to get two hands on the spaniel and confirm his Tobyness, but fortunately, I didn’t have to try to break up the party. Just then, I spied my neighbor and waved her over. “I’ve got him!” The poor woman, who had only minutes before returned from an out-of-state trip because her flight home had been delayed three days due to good ol’ Sandy, was relieved.

When I refocused my attention on the furricane in my living room, I saw Truman do something that he has never, ever, ever — in his entire history of living with me, EVER — done before. He picked up one of my slippers and ran with it. Now, this may not seem like a big deal to anyone who’s ever owned a dog, but those of you who followed this blog during Truman’s early puppyhood will remember that he was many naughty things, but he was never a chewer, or even a thief, of inappropriate items. His efforts were focused on epic power struggles with me for ultimate authority (otherwise known as Conquering Earth One Human At A Time). But never did he even so much as put his wee puppy tongue on a shoe or sock.

Totally weird. So I yelled as though he could understand English.

“What are you DOING? There are half a dozen perfectly acceptable dog toys on the floor right there, where you are!”

After telling him to drop it (which he did, instantly) and letting my neighbor in, we gave the dogs another minute or two of NASCAR time. Then we agreed the boys should have a real play date soon, Toby went home, and I retrieved my soggy slipper with an eyebrow raise toward Roo before getting back to prepping the salad.

We sooooooo need a fenced back yard.

Posted in Bad Dog NO, TRUMAN

Because of the cleanup of fallen trees and power lines in Hurricane Sandy’s aftermath, the township where we live has officially postponed all Halloween activities, including trick-or-treating, until Friday.

(Is that weird? That you can just postpone a holiday like that? Would they postpone Christmas for a blizzard? It’s weird to me.)

But because this is the first year in a while that I’ve actually carved a jack-o-lantern, I wanted to put him outside on October 31st to fulfill his Halloween destiny, darn it. So here’s a quick pic of Truman and “Gourdy,” the world’s happiest pumpkin. We had three or four trick-or-treaters come by early in the evening (because they weren’t sure or hadn’t heard about the date change), but after about 7:30pm, I turned off the porch light and brought in Gourdy’s faux candle. I hope my happy pumpkin lasts ’til Friday.

Thanks Anyway, Sandy, But I Prefer Earthquakes

For those of you who know us only from the blog, we’re fine. Hurricane Sandy blew through yesterday and last night, and while we did have some lights flicker and some pretty scary-sounding winds and rain, the townhouse we’re renting stayed dry and intact and electrically powered.

Truman slept through much of it.

Anyway, we’re grateful to have come through this unscathed, and ask you to join us in praying for the many millions of people who are dealing with loss and destruction today. Please also remember the folks who are working so diligently to restore basic city services and to shelter, help, and comfort those in need.

Resurrected more times than Lazarus, the blog shall rise again!

It’s been six months to the day since we left Southern California for Pennsylvania, and while the events of my last entry took the wind out of my blogging sails for a while, I’m ready to come back.

I have a lot to tell you…the, er, three or four of you who are still out there reading, that is. Truman likes to think of you as his loyal fans.

Yes, there will be photos.

Stay tuned. (Do people even say that anymore?)

When You Least Expect It…Expect It

Truman turned four years old (!) while Wolf and I were in Pennsylvania. I was assured by his puppysitters that he got birthday hugs and kisses on our behalf (if you’re not going to give him a steak or a jar of peanut butter or something, that’s all he really wants as a gift). Because the blog has been mostly devoted to Jethro lately, I wanted to pay a little tribute to my Grumpus. I bring you:

The thing is, he’s not a “kissy” dog, the way Jethro is. Jethro will lick your face off if you let him; Truman will usually go nose to nose with you for a full thirty seconds before deciding if you are worthy of his patented One Gentle Slurp on the Nose maneuver. But sometimes, when he’s really excited and you’re not expecting it, the slurp is fast and furious.

He does love to give scalp massages, but that’s a post for another time.

Happy New Year! Can I still be saying that on the 17th?

Wolf and I have been away for the last two weeks on a little adventure. We drove one of our cars across the country so we’ll have one less thing to deal with during the move in March. We crossed something like ten states in five days on the road. Five…long…days. Then I stayed in Pennsylvania for an extra week, getting to know a little about the area where we’ll be relocating, and trying to find a place for us to live.

It is no picnic finding a rental place that allows dogs, let me tell you. Yes, even extremely well-behaved dogs! I suppose I can understand a landlord’s prerogative in that; you don’t necessarily know your tenants or their pets. If it were me, though, I’d be much more inclined to allow dogs than, say, cats. After all, I’ve never had to replace the living room carpet because of a dog.

We have some good leads and will see how it goes. I’d just like to have an address, and a square-footage count, so I can start thinking more strategically about what to take with us and what to get rid of before the move.

Meanwhile, my boys were with puppy sitters the last two weeks. Truman stayed with his favorite adoring “aunties,” and got to play with some very energetic one-year-old golden retriever girls AND his favorite career-changed goldendoodle. Sometimes when I pick him up from Auntie Georgia’s house, I’m not entirely convinced he wants to leave.

Jethro was staying with a family in my puppy raiser group who just turned in their dog — also a male yellow Lab — for formal training. So that was good for both the snuggly dog and the people who miss having one to snuggle. They brought him back to me last night, and I swear he bulked up! Can’t wait to weigh him at the school on Tuesday and find out how much he’s gained.

From the sound of it, Jethro got lots of love and attention and training time (his first lesson: how to distinguish between puppy toys and children’s toys — apparently a LEGO sacrificed itself in the endeavor). They took him to restaurants several times, where he was apparently very well behaved; and to my puppy group meeting, where they said his obedience was quite good. He responds very well to verbal correction, which is a terrific trait.

I forget sometimes what a high standard we hold our dogs to. When someone says that he was very well behaved in a public place, I always think, “Well of COURSE he was!” And then I remember that he’s just five, five and a half months old. We forget. But people who aren’t used to service dogs in training often marvel at what our little puppies can do. Know anybody else who’d take a five month old pup to the office, or to a restaurant, and expect obedience?

And doesn’t it make you smile when someone says, “I didn’t even realize there was a dog here”…? What a gift these dogs are, for their eventual partners and for us. What a privilege to raise them, to teach them, to be proud of them and to love them long after they’re no longer ours.