The holiday food parade continues! Our South Bay puppy raiser group also holds an annual potluck in December (also a good one). We have lots of other festive traditions too, including a puppy gift exchange; donation opportunities for a local animal shelter; and a tear-inducing video full of photos of the previous year’s puppies-in-training, breeders, and working guides (that one’s rough, let me tell you — it’s been almost four years, but the sight of Lomax in harness at his graduation gets me EVERY FREAKING TIME).

Our group is huge, and our area leaders work really hard to put on a nice event — even going so far as to set up decorative photo backgrounds for puppy-posing pleasure. Jethro was happy to jump into the little red wagon, but wanted out just as quickly, so we had to be pretty speedy with the camera: 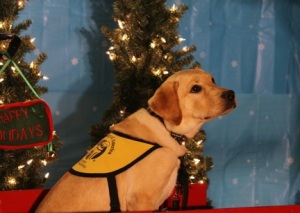 Let’s hear it for the world’s most tolerant Santa.

GDA does a lot of nice things for their puppy raisers, and the annual GDA Holiday Party is one of my favorite events. Puppy raiser potlucks are always good (people actually cook, for one thing…unlike a lot of other potlucks I’ve been to in Southern California, which are comprised of tables full of buckets of chicken, bags of chips and eight thousand plastic forks), the atmosphere is festive, and you have the opportunity to see raisers from other groups that you might not see much at other points during the year. 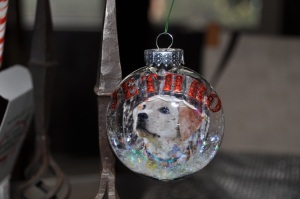 Every year, we’re asked to bring an ornament with our puppy’s name on it to hang on the tree, so I took a trip to the craft store (somehow managing to get out of there for less than fifty bucks — it’s a Christmas miracle!) and made one for Jethro. 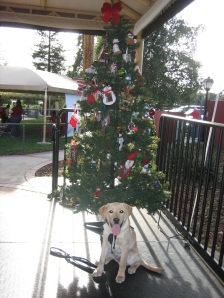 Stay tuned for pictures with Santa!

Jethro seeks direction in the brick courtyard of the new GDA graduation area.

GDA holds a puppy obedience class on campus one Saturday each month. The classes are broken down into puppy age groups so that everyone will get the most out of the offered instruction. Not only is it a good opportunity for the puppy department and training staff to get an in-person look at how your dog is progressing, it’s a good time for the raisers as well. It’s also a good opportunity to take home a very tired puppy.

The instructors always come up with something fun; whether it’s an obedience relay race, a dog-swap exercise or a puppy raiser challenge (like trying to relieve your dog while you’re blindfolded — that’s a good one), something silly or creative is usually happening alongside the learning. Today, there was a whole sensory playground set up under the shade structure that covers our beautiful new graduation area (thanks, donors!). For as far as the puppy eye could see, new experiences awaited: noisy battery-operated toys, wobbly trash can lids to investigate, various surfaces to walk across and climb on.

Because our class was the youngest of the day, the emphasis was on investigating rather than conquering. Some of the objects made strange noises or moved unexpectedly, so this was a good way to see how the puppies would react. Jethro typically has no problem investigating; he’s a confident little guy who doesn’t flinch at much, so he was pretty happy to jump right up onto things and play. And I don’t think there was a single battery-operated noisemaker he didn’t want to carry off with him.

Of course, he was probably even more interested in whatever leaves and wind-blown tree parts were scattered on the ground between the intended distractions.

I had to work today, but Wolf was available to take Jethro to his first official public appearance as a representative of GDA — a GDA booth at the Disability Awareness Fair at Honda headquarters here in Torrance.

GDA is always looking for donors and puppy raisers (especially now, in the middle of the Great Puppy Glut of 2010), and the presence of a tiny puppy in his tiny puppy jacket does wonders for recruiting. We live close by, so despite Jethro’s not-yet-fully-vaccinated status, he was allowed to participate because it was a short time period and he was small enough to hang out on top of the table, with the literature.

Seriously, could you say no to this handsome face (or the puppy, for that matter)? 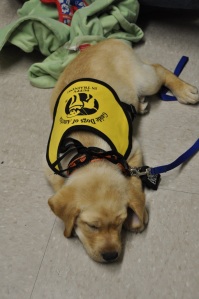 Our first South Bay Puppy Raisers meeting with Jethro was the October meeting — where there is traditionally a Halloween costume contest. We didn’t win this time (I’m 2 for 3!), but his “Julius Pee-sar” costume was hand-made and pretty fabulous, if I do say so myself. You’ll see that a few posts down the road….

The first part of the meeting is the obedience class, and for tiny puppies, puppy kindergarten. Since there were only a few super-newbies, we just practiced some cradling and talked about basic “It’s adorable and it’s home with me, but now what do I do with this thing” principles. It’s apparently the Great Puppy Glut of 2010 up at GDA; there are lots of new puppies are coming to our group over the next few months, so there were more people without dogs than with. Good instruction beforehand goes a long way, and our area group leaders and co-leaders are terrific about  encouraging new puppy raisers.

Because I’ve done this before, I made sure Wolf got some time on the floor with our boy so he could learn the proper technique as well. Fortunately, Jethro’s at the age where he’s sleepy much of the time. Another bonus is that GDA has started bringing in volunteers to help socialize the puppies in the puppy nursery before they go home with their raisers. This seems to have done wonders for the little ones; Jethro was ready and willing to cradle from day one. Whoever spent time with his litter, THANK YOU!

Two years later — and having received him back for good only three weeks into formal training — I feel like I can’t really do justice now to a post about Truman’s turn-in. What can I say? Turn-in is the day you shoot for as a puppy raiser, because it marks the end of all you can do to get your dog to the goal of becoming a guide. It’s up to the dog from there. Turn-in can also be pretty heinous, emotionally speaking.

In short: Truman’s Amy and I, and Wolf, made the long journey to GDA together. My boy wore a bow tie, as was to be expected from my ever-classy canines. The lunch was delicious, yet torturous, as always. The photo time was bittersweet, because Truman and Tai were the only representatives present from their litter. The roommate roll call was a relief, because the brothers were together. The walking away with an empty leash was…not applicable to me this time.

But I’ll tell you more about that next time.

In the meantime, enjoy these photos: 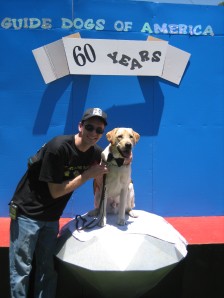 2008 marked the 60th anniversary of the founding of Guide Dogs of America, so the Open House theme reflected that. Because he is classy and sophisticated, Truman decided to wear his fancy bow tie for the occasion.

Here he is, posing on the big diamond at the photo backdrop, with Wolf. It was Wolf’s first GDA Open House, and for someone who was not yet my husband at the time — we had only been dating about four months, actually — he was not just a good sport, but actually quite enthusiastic! Wore the t-shirt and everything. My puppy raiser friends were impressed. I already knew that he was a keeper.

Here’s Wolf with Truman at the puppy kissing booth. Ridiculously cute and lovable, both of them.

The annual puppy trials are always a big draw for spectators, and a little nerve wracking for me. I wasn’t expecting much, considering what a total freak of nature Truman had been during the entire 2007 Open House, but the little man surprised me and earned the 3rd place ribbon in his age group! We were very proud.

Less cool was the number one verbal response to our third place win: “And…how many dogs were in the category?” Yes, people, Truman is a force to be reckoned with, and I have done my fair share of reckoning. But let us have our moment, will ya?

Tai, who is now a working guide (the only one from our litter, as a matter of fact), took home the first place honors. Here are the handsome brothers and their proud people, with their ribbons:

Well, I’m back from my blogging hiatus. I have photos and tales from a bunch of puppysitting I did back in September and October, with which I will regale you in good time.

Meanwhile, the latest news: I attended the annual GDA Christmas party potluck today. Good food, billions of dogs! It was nice to be able to walk around and say hello to all my human and puppy friends, and it was weird knowing that Lomax was just down at the kennels with Liam and Nevada and his other “classmates.” I hear the boys are doing well, so while I would of course have loved to see him, it didn’t bother me too much that I couldn’t. The longer he’s in there, the closer he is to graduation. Still keeping your paws crossed for us out there?

I didn’t take too many photos while I was there — there’s only so much you can do with a camera when your other hand is shoving cookies in your mouth, after all — but here are some happy shots of Joanna and Chandler!