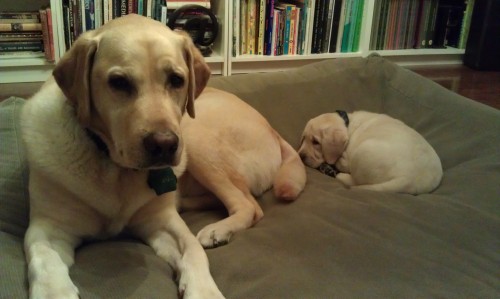 Truman looks thrilled to have another mini-me in the house, no? Riiiiiiight.

That’s okay. As I recall, the Jethro adventure started out in similar fashion. At first there was wild-eyed shuffling and living room donuts at the excitement of another dog to play with. Then, the realization set in: “Oh. He LIVES here. And he’s small, and loud, and annoying, and wants to chew on me. And the humans pay attention to him.” (By this I mean not that Truman is neglected in any way, but that paying attention to anyone but His Royal Grumpusness — at any time — is a serious violation of the Truman Penal Code.) And finally, the boys became friends.

I know we’ll get there.

So, to catch you up, yesterday was quite a different experience from my GDA puppy pickup days. I didn’t know as far in advance when I was getting a puppy, I didn’t get to choose his name (though I’m really happy with Sonny! Who knows where else that could have gone?), and I didn’t go to the school to get him. GDF is in New York, but they have a number of OOA (out of area) puppy raisers, so this is pretty routine for them. At least I’m within reasonable driving distance, and didn’t have to deal with getting my little guy at an airport! Fortunately, my Area Coordinator, who has been knowledgeable and helpful throughout the process, was able to bring him right to my house.

There’s not much else to tell, really. I got my bag of goodies — bowl, brush, collars, nylon leash, leather leash, chew toy, ear cleaner, fecal sample containers (a necessary “bleahrgh”), heartworm preventive, bag of dog food, and tiny yellow GDF puppy jacket — asked my AC some clarifying questions about some things that were in the manual, and that was that. For some reason that I’m sure is related to recent weather craziness (thanks again, Sandy), things on GDF’s part were a bit discombobulated, and I was missing a few items (training whistle and special training bone)…and my paperwork. Thus, I don’t yet know when Sonny’s birthday is, or when his shots are due, and I haven’t signed a contract. So, apparently, now’s the time to skip town with my cute new puppy!

The rest of the day and night went pretty much on schedule. A little sniff-and-explore, a little chaos a la Truman, some logistical “uh…it’s been two years…how do I do this again?” moments, some brain farts regarding commands that are different, and a night full of unhappily crated puppy sleep interruptions. I will say that it’s a heck of a lot colder here in the middle of the night than it is in Southern California.

Little Sonny is a sweet, cuddly puppy. He’s easy to pick up and hold. He’s picking things up quickly and seems to respond to his name and “sit” already. Relieving on hard surfaces is coming along, but sometimes it takes him a while. He’s not too bitey, not yet hoovering too much (though he has a specific taste for cabinet and drawer knobs/handles) and he doesn’t jump inappropriately, even when he’s excited. But I can tell that he’s got confidence, and a stubborn streak (in a Labrador? SHOCKING).

But here’s the best part of the story. Sonny was supposed to come to me last week, but the delivery person got the flu, so we had to reschedule for this week. I don’t know why — maybe his other littermates had gone out to their raisers or something — but Sonny apparently stayed at the home of one of the trainers for a day or two. My AC told me that the trainer said, “I hope this one’s going to an experienced puppy raiser….”

And I just had to laugh.

That’s all for now. I need to go get some sleep. At least, I hope that’s what’s going to happen. I’ll leave you with one more shot of my yellow fellows, who are definitely settling in and becoming…if not friends just yet, at least Tolerant Big Dog and Only Slightly Annoying Apprentice Dog. 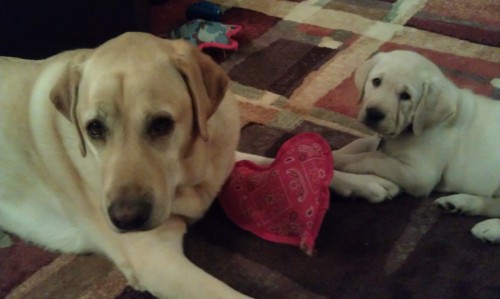 GDA does a lot of nice things for their puppy raisers, and the annual GDA Holiday Party is one of my favorite events. Puppy raiser potlucks are always good (people actually cook, for one thing…unlike a lot of other potlucks I’ve been to in Southern California, which are comprised of tables full of buckets of chicken, bags of chips and eight thousand plastic forks), the atmosphere is festive, and you have the opportunity to see raisers from other groups that you might not see much at other points during the year.

Every year, we’re asked to bring an ornament with our puppy’s name on it to hang on the tree, so I took a trip to the craft store (somehow managing to get out of there for less than fifty bucks — it’s a Christmas miracle!) and made one for Jethro.

Stay tuned for pictures with Santa!

The boys are sporting some brand-spankin’-new festive collars for the Christmas season, thanks to our good friend Denise, who keeps GDA puppies-in-training stylish throughout the year. You’d think they’d get into the holiday spirit wearing something like this: 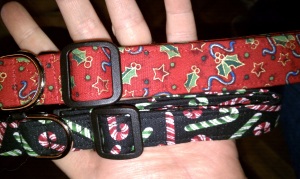 But mostly, they just moped around the house looking depressed. Sheesh, it’s not like I made them wear elf hats or something. Get with the program. 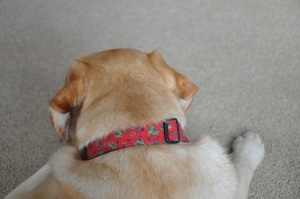 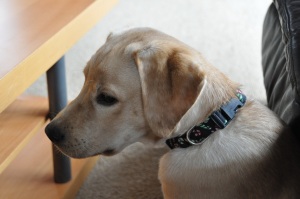 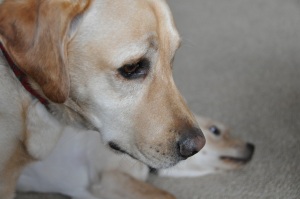 I told you I’d show you Jethro’s Halloween costume. While we didn’t take home a prize at the October meeting this year, I’m still pretty proud of his Julius Pee-sar outfit, crafted out of a pillowcase, some fancy napkins and a napkin ring from a discount linen store, and the pure cuteness that is Jethro.

Okay, yes, and the laurel crown was painstakingly made from wire-edged gold ribbon with hand-sewn gold bows. That’s the…crowning glory, I guess.

Don’t take that the wrong way…no way on earth will my dogs ever drink coffee. Though I will say I once had an apartment manager who used to give a daily cup of coffee to his already way too hyper Maltese accessory-dog. I promise I am not lying when I say that he told me, with a wild and dismissive flourish of his hand, “We are Columbian. EVERYONE drinks coffee!”

I do, however, love to take my puppies-in-training to the coffee house. It’s a good short outing that gets them used to restaurant-like establishments full of people, smells, music, and uncomfortable table legs. Plus, unlike at a number of restaurants I’ve been to, people at the coffee houses (both employees and patrons) tend to be pretty cool about having a dog there. I’ve even been offered water for the dog. My favorite thing to do is to have a good friend with me there as well. My best friend — known to Truman (and now to Jethro as well) as “His Amy” — joined us that day and was exceedingly helpful, even carrying my coffee to the table while my hands were otherwise full of squirming puppy. One of the many benefits of having another person with you on such an outing? Not looking like you’re sitting at a table talking to yourself.

While Starbucks will do in a pinch (or if I have a friend who prefers to go there, or even better, a gift card), my favorite place is the Coffee Bean & Tea Leaf. There are no CBTL establishments in Pennsylvania, I am heartbroken to discover. None. Zip. Nada. Bupkis. There’s one in the airport in Singapore, of all places, but not one in the greater Philadelphia area. Criminal, I tell you. Anyway, this means I am determined to haunt my local CBTL as much as I can until I’m forced to wave a bitter and tearful goodbye to my dark chocolate ice-blended mochas and my Moroccan mint lattes.

Here’s the boy on his first trip. I let him bring a blanket and his dinosaur in case he needed to chew on stuff. I believe I may have chewed on stuff as well. Probably something very full of sugary goodness. 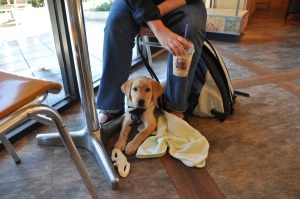 He settled in eventually.

Yes, there’s some nasty parvo out there, and yes, puppy raisers are being instructed to be near-paranoid in the effort to keep our charges away from it. But at the same time, you also have to start exposing your dog to public places so they become accustomed to The Big Scary World a little bit at a time. There’s a fine line. The best thing you can do is take the puppy on a quick, one-stop errand close to home that won’t require a canine potty stop.

We decided it was only fitting that Jethro’s first foray into public life should be someplace we’re familiar with to an almost obsessive degree.

My nine-week-old puppy went to Chipotle.

We relieved the little man before we put him in the car, then drove about ten minutes down the road, got him to “suit up” in his tiny puppy-in-training jacket (for the first time!), and carried him into the restaurant. Wolf stood in line to order our burrito bowls (steak, please) while Jethro and I made a beeline to a quiet table near the door. He sat nicely between my feet, and I spent the next few minutes petting him and talking to him gently until Wolf came back with our cornucopia of faux-Mexican take-out delights.

Back in the car, back to the house, back to the potty spot on the balcony, and mission accomplished. Good job, little man! Someday you’ll graduate to standing in the order line with me, and then pretending not to care that there’s a burrito and chips in the bag on the car seat right by your head.

Still too darn hot. But Truman is wearing his festive fall collar nonetheless, because handsome knows no season.

LabradorRodeo
Create a free website or blog at WordPress.com.