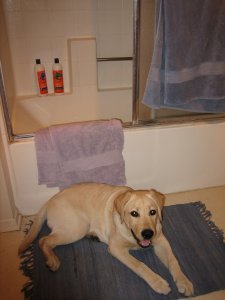 He’d been stinky. It was time.

He was all too happy to pose pre-bath, no idea what awaited him.

It was promising in the beginning, even after the closing of the door. Truman met the rushing water with gusto, perhaps a bit too much. My challenge was to keep him from shoving his entire head under the stream and flooding his little ears. Gusto became slight confusion as I pulled up the valve to redirect the water to the shower head in my hand. Slight confusion then gave way to “YOU’RE DOING WHAT WITH THAT, EXACTLY????”

That’s right, pal. Washing you. Bath time for you, stinkbug.

Not part of his plan, apparently. Though he did not bite or scratch or freak out in any sort of vocal manner, Truman did manage to investigate every possible inch of the enclosed space in an effort to find an escape route. A few times, he even stretched as far as he could with his front paws up the back wall of the shower, perhaps envisioning an impressive leap over the shower door, or at least an attempt at signaling for the assistance of passersby.

The end result, though pathetic to look at, was an orange-cream-scented Truman who then received a towel rubdown and his promised reward of chicken chips, and “Labrador Shuffled” circles throughout my apartment until he was mostly air-dried.