Nothing But the Tooth 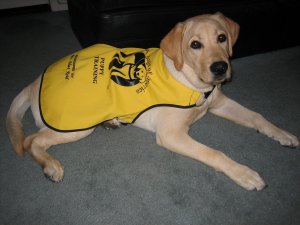 July 13 — When did little puppy Truman become big dog Truman? The little man is growing up so quickly. That’s why puppy raisers have to be so vigilant and consistent — a few months of development, with all those bad habits or good habits (depending on the work you’ve done), can take place in just a couple of weeks.

The milestones have been coming fast and furious. We received early permission to start using a training collar. We received Truman’s “big boy jacket” in the mail. And finally, FINALLY, he has all his adult teeth (can’t tell you how happy my wardrobe and I are about that).

For the longest time, I didn’t see one discarded puppy tooth anywhere, which seemed crazy to me, as I don’t have a yard for him to leave them in (and you’d think I’d notice a tooth on the floor in my apartment). It seems the moment I mentioned this out loud, however, Truman started leaving a trail for my amusement. I looked down one day to find a tooth in the middle of my living room carpet. Then there was one on another puppy raiser’s living room floor. Then there was one on the floor of my cubicle at work. But my favorite one happened at church.

It’s illustrative of the parental mode a puppy raiser can find herself in, even if she’s never had human children. Like the mom who puts the toddler’s used Kleenex in her purse when there is no nearby trash can, we find ourselves dismissive of any passing thought that what we’re touching is just plain gross, because life just has to go on sometimes. So when I was sitting in church that morning and noticed Truman playing with something on the floor, I reached for it immediately, discovered what it was and put the little tooth in my pocket. A few minutes later, I put the communion bread in my mouth, realizing only after I’d done so that I’d just employed the same hand that had picked up the tooth. The mental “oh, well” followed in a split-second.

A few minutes after that, as it dawned on me that our “sanctuary” is the gymnasium of the local Boys & Girls Club, I found myself saying a quick prayer and pulling the tooth out of my pocket just to make sure it was actually Truman’s.

2 responses to “Nothing But the Tooth”