Riding the Rails with Roo 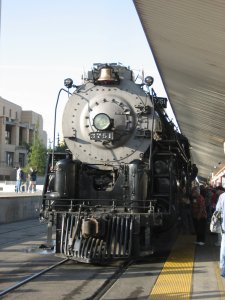 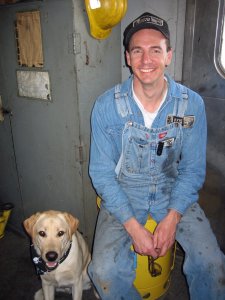 Thanks to our favorite steam locomotive fireman, Truman and I were invited to ride with the crew of Santa Fe 3751, owned and maintained by the San Bernardino Railroad Historical Society, as they ran the mighty 1927 steamer on an excursion down to Fullerton’s annual Railroad Days festival.

It was an amazing trip! The tool car, pictured below, has open windows in the doors so you can stick your head out and feel the breeze, take a look around, and take in the entire sensory experience as you roll down the track. 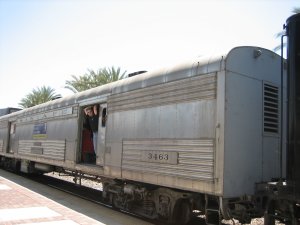 The funniest part was watching the faces of Joe and Jane Citizen as we chugged over freeways and past strip malls…even folks who live close to the tracks don’t see THIS every day. Kids and adults alike waved enthusiastically as we passed, and I wish I could have counted the number of people who held up their camera phones (even from the windows of moving vehicles) to capture a little piece of this elegant time machine. 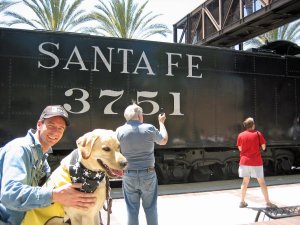 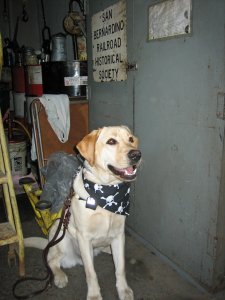 As I’d predicted, Truman was excited and wiggly as soon as we got on board, but settled in quickly and was content to ride on the old wooden floor of the car, getting up only to occasionally seek attention and ear rubs from his friendly crew mates.

Meanwhile, I had been warned that a ride in the tool car could be hazardous to decent clothing, so Truman’s official puppy-in-training jacket didn’t stay on him very long (and in the few minutes he did wear it, he managed to magically attract some grease that took three wash cycles, half a bottle of soap, a stiff-bristled brush and a near exorcism to remove). But any dog who’s riding a steam train needs to wear a bandanna, right? So we went with the skull & crossbones theme, which turned out to be a good choice — on one prior excursion, the crew apparently flew a Jolly Roger from the engine just for fun. Truman fit right in with the rest of the guys.

His jacket wasn’t the only thing that needed a bath when we got home. By the end of the day, after lolling about and picking up some souvenir grime from the collection that has accumulated on the floor over the last 60 or so years, Truman was almost a black Lab. 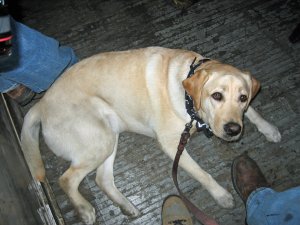 7 responses to “Riding the Rails with Roo”