Once we hit ABQ, we stayed with some wonderful friends who love both trains and dogs (which is, in part, why they are such wonderful friends). Truman made friends with the considerably older Arrow (a black Lab/Chow mix) and Cedar (a chocolate Lab), who were quite kind to him despite his meeting them on their turf and being full of I’ve-been-in-a-car-forEVER-and-need-to-play-NOW enthusiasm. Funny, all I wanted to do when I got out of the vehicle was sleep.

Saturday morning, we headed over to the property where our friends are helping to restore the historic Santa Fe 2926 steam locomotive. Wolf makes a trip out there a few times a year to lend his engineering experience with things like calculating the thickness of the metal in different spots on the boiler, so they’ll know where to reinforce, repair or replace it. 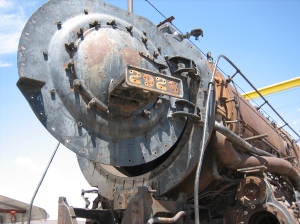 The soon-to-be-grand-again lady was stuck in a park for years and years, exposed to the elements, so the restoration is quite an effort! She may look rusty now, but she’s a tough old gal and she’ll be gorgeous when she’s done. I can’t wait to see her restored to her former glory, gleaming in the Albuquerque sunshine and barreling down the tracks to the wonder and delight of those who remember her heyday and those who’ve never experienced anything like her.

To give you some sense of scale, here’s a shot of Truman in front of the wheels, and of me and Wolf inside the fire box. 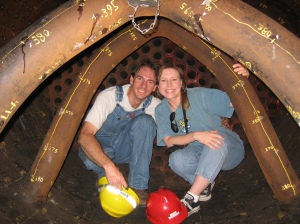 Also pictured are the historic Santa Fe railroad shops in downtown Albuquerque. And for my fellow Southern Californians, I’ve included one shot with a blue sky that you will not believe…partly because you may never have seen one.

We ended our day with a swim in our friends’ pool. Truman enjoyed it so much that he decided to take an unauthorized dip AGAIN just before we were about to leave for church the next morning. There was a little more “pew!” in the pews that Sunday. “Yes, ma’am. He’s a guide dog puppy in training. No, the wet dog smell isn’t on purpose so the blind person will know where he is.” 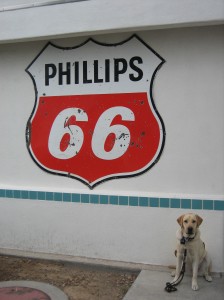 After church, we had lunch at the Route 66 Cafe, bid our friends farewell, and hopped back on the road to our next stop: Arizona.

This entry was posted in Bad Dog NO, TRUMAN. Bookmark the permalink.