I Just Met You! Where Are You GOING?

So it was pretty bad timing, but Wolf and I had this family friend’s wedding to go to. A couple of hours out of town. The day after we picked up Jethro.

Clearly, the little guy was too young to accompany us — he turned seven weeks old the day we picked him up, and that, my friends, is as young as we can get ’em — but we had already RSVP’d and couldn’t in good conscience not attend. What to do?

Amy’s my best friend, and as my former roommate, she’d also survived The Truman Administration. I remember one time I left her in charge of the young Trumanator for just a few hours one evening, and I returned home to find everyone still alive, if exhausted. So, I knew she could deal with this one. She came over to the house while we were gone, so Jethro wouldn’t be thrust into an entirely new environment just shy of 24 hours into his *first* entirely new environment. We set up an x-pen in the living room (on a sheet of plywood, covered with plastic and an old bedsheet) so she could contain him if she had to. And beloved Truman got to spend a fun-filled day and night with his other favorite humans (and our favorite puppy sitters), Matt and Amy (who raised Truman’s brother, Guide Dog Tai). It was a great plan, and it worked pretty well.

Most hilarious moment of the day: I received a text message from Amy that read, “Nap? Check. Lunch? Check. Pee? Check. Poo? Check. All good. Now he’s back to sleep. I’m starting to realize just what a monster Roo was. Poor, poor tormented little evil Roo.”

Again, nothing against my lovable forever-dog, but he really was criminally insane. For a long while, there. My clothing and I have the scars to prove it. The thing is, nobody but Amy really believes me, because she. Was. THERE. 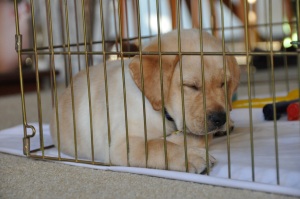 So I felt much better about having left Amy with the new guy for an entire day. He was, of course, an exhausting amount of work regardless, simply because he’s a puppy, but as Amy said to me several days later, “It was amazing. I realized that puppies can be FUN!” She was amused and astounded at his bouts of what I like to call “narcoLabsy,” where a young puppy will play for a bit and then suddenly crash into dreamland for a while. (Truman…never really slept. He still doesn’t, really.)

Good boy, Jethro. Your Amy loves you, and we told you we’d come back. Good dog.

This entry was posted in JETHRO, TRUMAN. Bookmark the permalink.

4 responses to “I Just Met You! Where Are You GOING?”