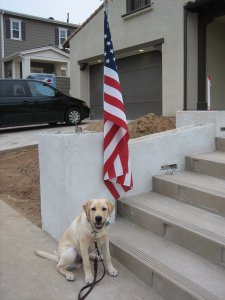 It’s been a pretty laid back day, as holidays go. When the Fourth of July is on a Wednesday….

I began my day by volunteering with Soldiers’ Angels at the JP Blecksmith Memorial 5K Run. Truman got to sleep in, but was happily hopping around the living room with Amy by the time I got back. He had another nice nap while Amy and I went to see Ratatouille (which is highly recommended, by the way!) then spent the rest of the hot, humid afternoon lazing in the apartment with us. We just got back from a nice walk around the neighborhood, where we took the above photo (hard to find a REAL flag at an appropriate height for a picture) and enjoyed the sights and sounds of neighborhood family gatherings and a few bold daylight firecrackers.

The big local fireworks shows should start in about an hour, and I figure we’ll probably just go out on on the balcony — or maybe on the roof! — to see what we can see, which gives us a quick escape route back to the apartment if it’s too much for the little man.

UPDATE: We went up to the roof, where if you look carefully you can see as many as eight or nine different fireworks shows all over the southland, the closest of which is near enough to make some impressive light and sound. Truman could see that one, and watched, unafraid, for a good while before growing tired of the spectacle and returning to his preferred activity of sampling the delicious bird poop at his feet. My fearless little wonder. Good dog!

This entry was posted in Holidays, TRUMAN. Bookmark the permalink.