October 1, 2007 — No, I’m not talking about his Halloween costume…you’ll hear about that soon enough.

Truman’s first “fun” kennel stay (i.e., no neutering, no “procedures,” no poking or sticking or snipping), was a great success. The little man spent five rambunctious days and nights at Camp GDA while I was in Minnesota for a conference. He probably ran and shuffled and tussled and wrestled and wagged and flipped and flung himself about as much as he possibly could, because as you may discern from this photo, he was pretty sacked out when I got him home. 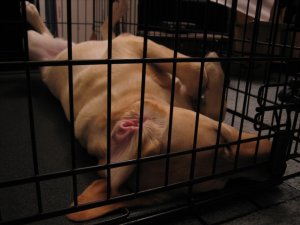 For about a day, that is. Truman’s batteries recharge quickly.

But the best news of all is that his evaluation went incredibly well! I admit I uttered a quick prayer before opening the envelope with his name on it, but I apparently had nothing to prepare myself for.

According to his evaluator, Truman “played well with others,” was “interested in other dogs but easy to control,” “walked nicely with a loose leash,” “did not require many corrections,” “laid quietly” in establishments, “responded quite well with a new handler in an unfamiliar area,” “responded well to obedience commands,” and is an “overall nice boy!” He isn’t even scheduled for a second evaluation, which is a good sign.

I also admit I laughed out loud when I read the assessment of his energy level as “moderate,” but I did factor in the reality that he’d been at the kennel for a day before going out for his eval.

Truman is still a wild and crazy puppy at times, but he has definitely had an epiphany of sorts in the last month or so. We often speak of the light switch going on…this isn’t the BIG light switch, but there has been a significant change in his demeanor and maturity. I’m quite pleased.

I would say I’m giving him extra hugs and kisses these days because I’m so proud of him, but that would imply the possibility of giving him more than I already do.

6 responses to “Truman as Rock Star”