Riding the Rails with Roo, Part 2

May 24, 2008 — There’s not always an opportunity for us (or most people) to hang out with a big steam locomotive, but there is a local train club here in Southern California where steam enthusiasts gather to build and run their own miniature trains, and to give rides and tours to the public as well.

Truman’s favorite human is a member of the Los Angeles Live Steamers, so we were invited to attend their annual Spring meet. People from all over the country descend on the LALS portion of Griffith Park for a weekend of food, entertainment, camping, and riding the little rails through the forest!

We were fortunate to be in the company of one of the core members of the club, who gave us a special walking tour of the facility. Truman enjoyed his stroll through the woods and a photo session with several of the miniature set pieces that make the track circuit even more fun. We thought the bridge was especially cool:

There are full-sized pieces on the property as well. This caboose houses the club’s library of historic books, documents, manuals and other train-related ephemera. 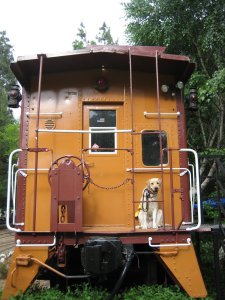 The atmosphere was festive, the BBQ was delicious, and the entertainment was provided by our favorite big band, The Fabulous Esquires…and yes, they played “Take the A Train.” 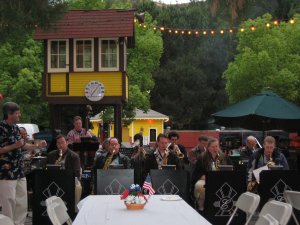 If I hadn’t had to keep both hands firmly on Truman, I would have taken a photo of us riding this little Santa Fe. Truman is typically an excellent traveler…when he’s in an enclosed compartment, that is. When he is sitting on a bench in front of me, with my arms around him to keep him from leaping off, he is less enthusiastic about riding the train. We had a few power struggles in which he was certain that if he wiggled enough, or climbed over me, he could elude my grasp and disembark mid-trip, hobo style. Fortunately, however, my dog-enhanced biceps are well practiced in the art of puppy restraint, and no one caused a derailment…. 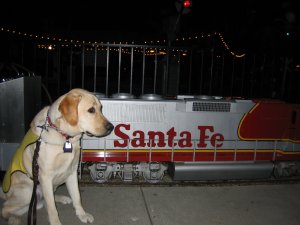 2 responses to “Riding the Rails with Roo, Part 2”